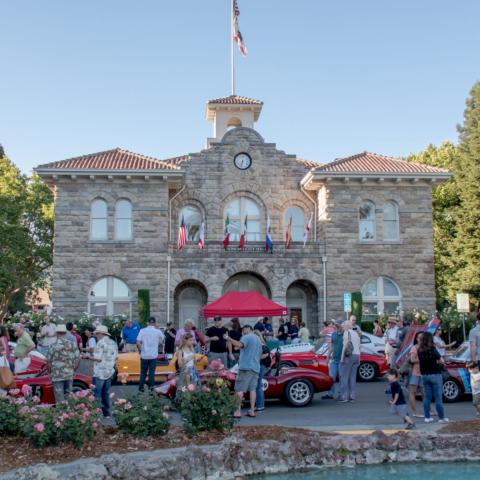 This popular charity event benefits Speedway Children's Charities, the charitable arm of Sonoma Raceway. The Sonoma chapter has distributed more than $6.4 million to non-profit youth organizations in Sonoma County since 2001.

Locals and race fans alike are invited to enjoy tastings from more than 16 local restaurants and wineries, as well as an up-close look at more than 30 historic race cars on display. The featured cars include local entrants Bill and Shirley Angeloni and their 1936 Ford, Jim Hybiske's 1970 Porsche 911 RS and Bill Young's 1948 MG TC, as well as a collection of race cars competing at the Sonoma Speed Festival, May 31-June 2.

The Sonoma Speed Festival on the Plaza kicks off with a parade of historic racecars departing under a full CHP escort from Sonoma Raceway beginning at 5 p.m. The parade of cars will motor along Highway 121 and Highway 12 before arriving at the scenic Sonoma Plaza. They will park in front of Sonoma City Hall on display for guests to enjoy. Attendees can also vote for their favorite car in two different categories: Best Local Historic Car and Featured Historic Race Car.

The evening on the Sonoma Plaza sets the tone for the inaugural Sonoma Speed Festival, which will feature an extraordinary group of vintage racing vehicles for a celebration of wheel-to-wheel competition at Sonoma Raceway. In celebration of the Sonoma Raceway's 50th anniversary, the event's featured class will be 1966-'69 Historic Trans-Am, highlighting the Trans-American Sedan Championship battle fought on the track between Mark Donohue and Parnelli Jones in 1969.

In addition, the 10-time Grand Prix winning Mercedes-AMG Petronas Motorsport Formula One car of Lewis Hamilton will take to the 2.52-mile, 12-turn road course for the very first time, June 1-2.

SONOMA SPEED FESTIVAL ON THE PLAZA