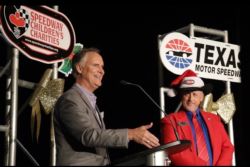 Speedway Children’s Charities-Texas Chapter also provided 50 kids’ bicycles and helmets to both children who attended the event as well as organizations that will distribute them for the holidays to local North Texas children. The bicycle giveaway was made by possible by the financial support of JAG Metals and the helmets were donated by Academy Sports & Outdoors.

Chapter president and Roanoke, Texas Mayor Scooter Gierisch distributed the funds and presented oversized checks to representatives of the local organizations. Scott Murray, a long-time Dallas/Fort Worth television network affiliate sports director/anchor who was a founding member and former president of Speedway Children’s Charities-Texas Chapter, presided over the festivities as master of ceremonies.

“Thanks to the incredible agencies we have partnered with,” said Marissa Chaney, Executive Director of Speedway Children’s Charities-Texas Chapter. “We know every grant dollar distributed will directly serve North Texas children with the most critical needs.”

Since 1997, Speedway Children's Charities at Texas Motor Speedway has distributed nearly $12 million in funding to non-profit organizations in Collin, Dallas, Denton and Tarrant counties supporting children in need. SCC Texas raises money throughout the year through a variety of fundraising events ranging from its annual clay shot and golf tournament to 50/50 raffles, charity track rides and much more.

After the donations were distributed, Santa made his way to The Speedway Club’s Grand Ballroom for Dinner with Santa, where guests were treated to great food by Levy Restaurants while enjoying the musical offerings from J’s Dueling Pianos.

All attendees were provided with a voucher for the Gift of Lights holiday lights display at Texas Motor Speedway through January 1, 2023. The evening was capped off by a spectacular fireworks display donated by Pyro Shows with complimentary hot chocolate and cookies provided by Levy Restaurants. Special thanks also to Leverage One Events for their participation.